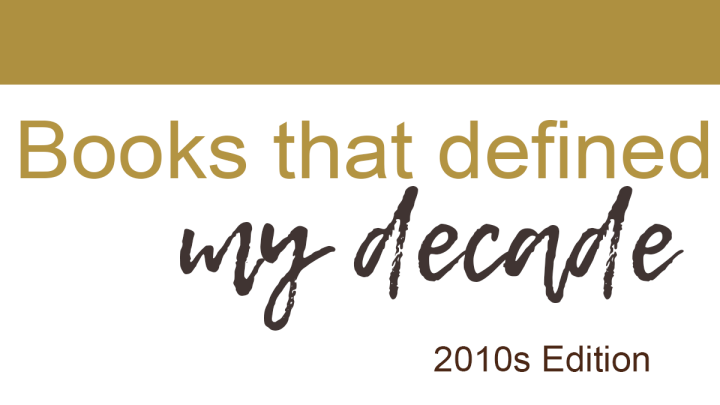 This post was entirely inspired by Kate @ Your Tita Kate’s post, The Books That Defined My decade. I never thought to even reflect on my decade, but after reading Kate’s post, I immediately wanted to do the same.

I have a terrible memory, so I don’t remember much from my childhood, which makes me feel like I didn’t genuinely exist until 2010. At the start of this decade, I was eleven years old, turning twelve that March and, at the time of writing this post, I am twenty-one, about to turn twenty-two this March. I went from primary school, secondary school, college and university all in this decade alone. And just thinking about that blows my mind. In some sense, it shouldn’t because it’s just time passing but, at the same time, that is a lot of significant milestones in my life. I went from a child to a young adult, and reading Kate’s post made me realise that’s not a small thing. Reading is a big part of my identity, especially during this decade is where I had more choice over the books I read. While Kate’s post is more about books published in each specific year, my list is naming the books that I read in that year that made the most significant impact on me. So not all of them were great reads, but I feel like they deserve some acknowledge from impacting me in some way.

I’m going off what years I’ve put in my Goodreads profile but I feel like I might be off by a year or so hence I’ve added some books here that I actually read in 2009.

END_OF_DOCUMENT_TOKEN_TO_BE_REPLACED 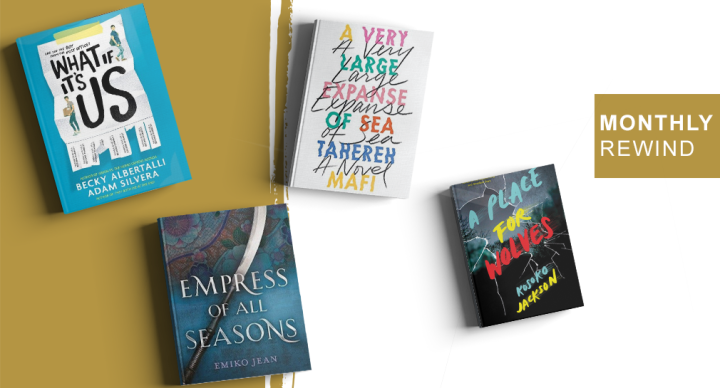 What If It’s Us – Arthur is only in New York for the summer, but if Broadway has taught him anything, it’s that the universe can deliver a showstopping romance when you least expect it. Ben thinks the universe needs to mind its business. If the universe had his back, he wouldn’t be on his way to the post office carrying a box of his ex-boyfriend’s things. But when Arthur and Ben meet-cute at the post office, what exactly does the universe have in store for them?

A Place For Wolves – James Mills isn’t sure he can forgive his parents for dragging him away from his life, not to mention his best friend and sister, Anna. He’s never felt so alone. Enter Tomas. Falling for Tomas is unexpected, but sometimes the best things in life are.

Empress of All Seasons – Each generation, a competition is held to find the next empress of Honoku. The rules are simple. Survive the palace’s enchanted seasonal rooms. Conquer Winter, Spring, Summer, and Fall. Marry the prince. All are eligible to compete—all except y?kai, supernatural monsters and spirits whom the human emperor is determined to enslave and destroy. Mari has spent a lifetime training to become empress. Winning should be easy. And it would be, if she weren’t hiding a dangerous secret.

A Very Large Expanse of Sea – It’s 2002, a year after 9/11. It’s an extremely turbulent time politically, but especially so for someone like Shirin, a sixteen-year-old Muslim girl who’s tired of being stereotyped. Shirin is never surprised by how horrible people can be. She’s tired of the rude stares, the degrading comments—even the physical violence—she endures as a result of her race, her religion, and the hijab she wears every day. So she’s built up protective walls and refuses to let anyone close enough to hurt her. Instead, she drowns her frustrations in music and spends her afternoons break-dancing with her brother.

Dear Evan Hansen – When a letter that was never meant to be seen by anyone draws high school senior Evan Hansen into a family’s grief over the loss of their son, he is given the chance of a lifetime: to belong. He just has to stick to a lie he never meant to tell, that the notoriously troubled Connor Murphy was his secret best friend.

END_OF_DOCUMENT_TOKEN_TO_BE_REPLACED

* I received a copy of this book from the publisher through NetGalley. This in no way affected my opinion of the book.

A chance meeting has Arthur and Ben cross paths at a New York post office. When they fail to exchange details, both boys go in search of each other. Ben is suffering from a break up which causes him to lose his main friendship group. Arthur is an intern on a limited time frame. Once reunited, they face a ton of near misses and secondchances. But the universe isn’t exactly always in their favour.

I feel I am yet to find a favourite within both Becky and Adam’s books so far. Both of them have a way of writing that doesn’t always work for me. I was hoping with What If It’s Us, it would be a significant mash-up of everything I liked from both authors.  Unfortunately, that’s not the case. I liked What If It’s Us, I enjoyed reading it, but in the end, it just wasn’t for me. This book didn’t show the qualities that I had appreciated from previous novels.

I  feel a bit guilty for speaking so negatively later on in the review, but there’s still a lot to love in this book. The side character, including Ben’s best friend, really bought the book together and made it little funnier to read. The diverse cast of characters Arthur is gay and Jewish with ADHD while Ben is gay and Puerto Rican. I enjoy the little conversations about Ben and how painful it is for him and to have his culture erased because he’s white passing. There’s an intense moment where Arthur says something that crossed a line and Ben rightfully calls him out on it. It’s a bit strange and confusing to describe, but I loved many aspects of this book, the concept, the story, I just wasn’t a huge fan of how it was all executed.

I really did not like Arthur or Ben. In my opinion, Ben was more likeable than Arthur. But I really could not click with either of these two. The biggest critique I have to give is predictability. Knowing what’s going to happen can go, either way, you either anticipate the ending you’ve guessed or found yourself reading at a sluggish pace. While Ben and Arthur have charming moments which I loved, there was no real plot. A couple of things happen, but the rest of it just falls really flat. The initial meeting was sweet and fun, and you expect more to come off from it, but it immediately goes downhill as the authors kind of force the relationship to happen. Given the timeframe the book is set in, Arthur is due to return home at the end of the summer, little really happens, and I was left a little disappointed. Once they’ve met, it mostly constant pining from them, Arthur over Ben and Ben over his breakup.

They do eventually come together and actually reach the point where they’re actually enjoyable to read as a couple. I was disappointed that it doesn’t last as long as you’d think. I get everyone hates the ending, but it was the saving point for me. It was quite open, and I understand why everyone would feel frustrated, but it’s a better ending.

I usually have no issues with current day pop references in novels, no matter how outdated it’ll read in the future. But what on earth was happening? I stopped reading for a bit because every sentence was Hamilton, Hamilton, Hamilton. Another popular musical. And then another reference. This does not include a very adorable scene where Arthur and Ben sing along to musicals. My stone cold heartfelt warmth for a moment. But I did feel like the references were simply over saturated.

Overall, What If It’s Us is not exactly a disaster read — and I think despite with my low rating, it has its shining moments. Too slow, and not enough was happening. The in-jokes and references became too much. It just didn’t work for me. I won’t cross off both authors from TBR because of it, I appreciate the stories they write, but this book wasn’t the one for me.

Just minutes after midnight, Mateo Torrez and Rufus Emeterio receive their Death-Cast calls: they are going to die today. Despite being total strangers, they find themselves meeting each other and having one final adventure on their last day ever.

Can you believe he spoils the ending with the title and I still found myself a total wreck by the end? I have not read any single Adam Silvera book before reading this, but if they’re all as gut-wrenching and amazing as this: count me in.

The concept is so fantastic and Silvera has created such an inventive, alternate world.  It’s very character-driven as the book encompasses a whole day in the life of two teens as they go around whatever they want. Mateo’s introverted, while Rufus is more outgoing, but both use this day to truly be themselves without the fear of judgement because, hey, they’re dying today.

They visit their favourite food places, close friends and visiting Mateo’s dad in the hospital. It’s packed with moments of emotions and first experiences. The plot was very sweet and sentimental. They’re very empathetic characters which such different personalities but somehow connect and spend the day working together to have a fulfilling ‘Last Day’. At its core, it’s basically a message of carpe diem but it plays out in such an interesting way

One of my favourite parts was the inclusion of other character’s perspective. When I first saw it, I wasn’t too sure of it since most of the time, it never works. But here it did. In between the main story, we get a brief glimpse into the lives of many other characters. Even though they aren’t central to the main story, it shows how the actions of other people are connected to plot in some way.

To be honest, I don’t have many criticisms aside from the technicality of Death-cast and the one-day love story. I would ignore this if I was you guys, I’m just being technical. You’re called on your mobile that you’re doing to die that day but what if you don’t have a phone? Does some scary man knock on your door at midnight and be like ‘so ya, you’re gonna die today?’ Or maybe the universe is set up in a way that everyone has one but just doesn’t seem plausible. Also, I’m just very sceptical of one-day love stories, maybe it was all for plot’s sake, though, but I loved their story, nonetheless.

Overall, it’s easily one of my favourite books this year. It’s so great and I definitely need to bump Silvera’s books up my reading list. I would recommend this one to anyone!

tw: death of LGBTQIA+ characters, anxiety, mentions of suicide (if you’ve read the book and feel like I’ve missed something out, please tell me!)