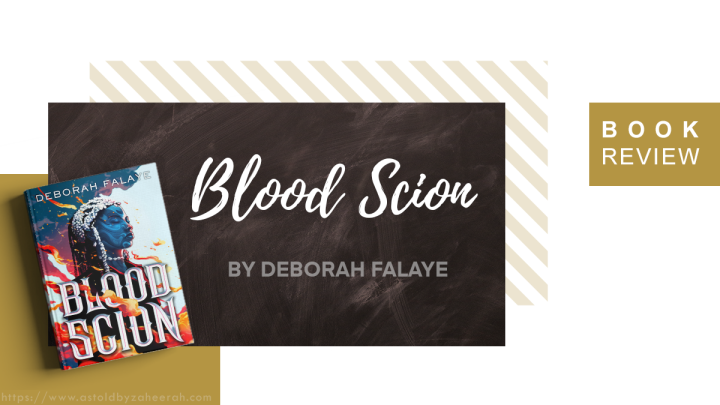 As a descendant of the ancient Orisha gods, being a Scion is a death sentence under Lucis’ violent rule. When she is conscripted into the Lucis army, Sloane uses it to get the revenge she has always strived for. But as she rises through the ranks, learning to fight the enemy, she risks losing herself as her ability to suppress her powers weakens and threatens to harm all those around her.

Blood Scion is remarkable. As someone who has been losing interest in YA fantasy, I found myself thoroughly surprised by Bloodscion, which is a shocking and action-packed debut that has the potential to be a hit for older timers and new fans alike.

Fifteen-year-old Sloane has constantly searched for her mother’s body, hoping to clear the rumours of her disappearance and death. During her nightly trawls, she is ambushed by a Lucis soldier and uses her powers to kill her intruder. Scions are descendants of the Yoruba people who were gifted with magical abilities from the Orisha. A dwindling population that the Lucis are currently hunting. Even being wrongfully accused of being a Scion is a death warrant. When Sloane is conscripted to join the Lucis army, despite every bone in her body telling her to run, it is the only chance she has to find the truth of her mother’s death. Thus begins her journey toward revenge and seeking justice for others of her kind.

Blood Scion looks straightforward from the outside—a typical young girl infiltrating an enemy base. You would probably think you’ve read this before.  But what makes this stand out is the story. It is complex and well built, solidified with characters that stand on their own and together. Sloane goes to Avalon and joins a squad of other children who have their secrets about joining the army. The story moves fast and keeps you informed without getting confused. The world Solane presides in is dangerous and brutal. The Lucis are colonisers, and there is no beating around the bush about the genocide they have committed and continue to engage in the story as Sloane and her peers are trained to become the next crop of soldiers.

Falaye is a remarkable writer, and I’ll definitely be watching out for future releases from her that are not in the Blood Scion series. She writes with great detail that informs the reader and brings to life the world around Solane despite the story taking place mainly within Avalon, their training ground. Solane is a complex protagonist whose character is pulled apart and rebuilt together by the very people who would want her dead if they knew the truth. A child soldier who fights so hard for the truth, it is heartbreaking to see her go through so much pain.

As mentioned, the Lucis are colonisers. And Blood Scion does not shy away from the atrocities they commit to Scion and their own soldiers alike. Falaye balances the storytelling well while also discussing war and oppression. Sloane must navigate a world where the Lucis and their propaganda are rampant. The intensity of violence was surprising to see in a YA as the experience of children soldiers will never be easy to witness. Falaye does not water down anything and brings to light every harsh detail Solane faces. While a fantasy world, it is still the reality for many children worldwide.

Overall, a gritty and dark debut about a young girl’s journey for survival and revenge. Based on Yoruba mythology, Blood Scion is intense, further elevated by Falaye’s imagination. With excellent characters and an intriguing fantasy world, Blood Scion is the start of a story that promises to be exceptional.