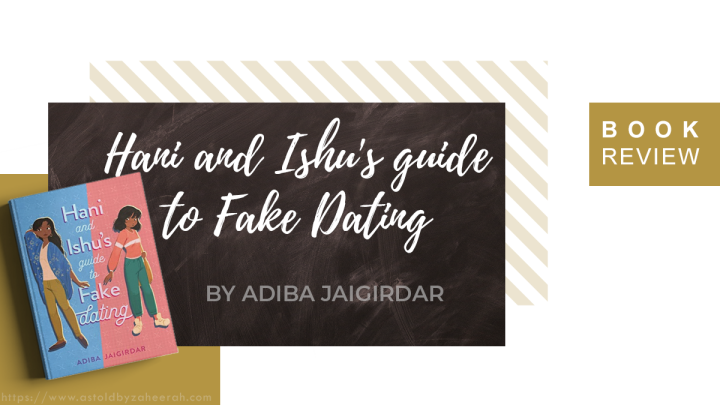 When her friends question her bisexuality, in a panicked state, Hani Khan tells them she is dating someone: overachiever Ishu Dey who is the complete opposite of Hani. But Ishu agrees to help on the condition that Hani would help her become Head Girl in hopes of convincing her parents she will not become like her sister. The guide made and rules set down; all they need to do is last a couple of weeks. As the weeks go on, Ishu can’t understand why Hani allows her friends to mistreat her. Hani can’t understand why Ishu won’t trust her older sister. But when they really start falling for each other, things get messy, and rules are broken.

I was not the biggest fan of Jaigirdar’s The Henna Wars, so I went into Hani and Ishu’s story quite hesitant, but I can definitely say my expectations exceeded a lot. Jaigirdar has improved a lot, and it shows in Hani and Ishu’s Guide to Fake Dating because this was such an adorable read!

Hani and Ishu take the fake dating trope and gives it a fun, refreshing (and desi) twist. Despite being out to her parents, her friends give her trouble when Hani decides to finally come out as bisexual to them. She already struggles to explain her religious and cultural background to them, so they aren’t too supportive when it comes to her sexuality. There she decides to blurt out that Ishu Dey is her girlfriend. Coming from similar backgrounds (They are both desi, Hani is Bangladeshi, and Ishu is Indian), Hani soon convinces them it’s real; now she just needs Ishu to get on board. Ishu Dey is top in her classes, low on the social pecking order. When her sister returns home and shatters their parent’s expectations, she is desperate to not look like a failure under their eyes. And dating Hani gives her the attention she needs to boost her social standing.

I loved how wholesome this story was. Hani and Ishu are trainwrecks in the best way possible. They appear incompatible, but Hani helps Ishu open up in ways that she never thought was possible after spending some time together. Even telling her why she feels like the need to compete with her older sister. Ishu opens Hani’s eyes to the way she’s been mistreated by her friends and begins to make her realise that she doesn’t need to hide parts of herself, her religion and culture because they chose to not listen. Her friends will frustrate, but it’s so natural for a lot of young Muslim teens.

Overall, Hani and Ishu’s Guide to Fake Dating was a fantastic read. So wholesome and highly entertaining! A story of two girls discovering themselves and becoming more comfortable in their own skin. A great quick read for young teen readers!