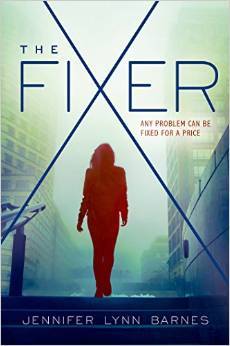 When sixteen-year-old Tess Kendrick is sent to live with her older sister, Ivy, she has no idea that the infamous Ivy Kendrick is Washington D.C.’s #1 “fixer,” known for making politicians’ scandals go away for a price. No sooner does Tess enrol at Hardwicke Academy than she unwittingly follows in her sister’s footsteps and becomes D.C.’s premier high school fixer, solving problems for elite teens.

Secrets pile up as each sister lives a double life. . . . Until their worlds come crashing together and Tess finds herself in the middle of a conspiracy with one of her classmates and a client of Ivy’s. Suddenly, there is much more on the line than good grades, money, or politics, and the price for this fix might be more than Tess is willing to pay.

A review describes it as a cross between Veronica Mars and Scandal, and it is entirely accurate. I have watched both shows (well, a couple of episodes of Scandal), and I can definitely see the inspiration. The high school life of VM and the Scandal theme, though aimed at a younger crowd.

Tess Kendrick is a very independent individual. She never intended to become her high school’s Fixer, in fact, she tries to escape. The more she tries to avoid it the more she gets trapped in the political lives of DC’s most important people and their children. Reading about her solving issues and thinking through puzzling problems gives you quite the ride of a read. I am looking forward to seeing Tess’ sister’s character get more developed, the big plot twist towards the end gives us new insight into her character that I certainly wasn’t expecting. I loved Tess’ little gang. Asher is sweet, and  I loved him from the very first time he appeared on the page, who then ends up becoming Tess’ main confidant and partner in crime. Vivvie started off as this adorable, bubbly character who stuck by Tess’ side because she didn’t have anyone else to hang out with, but soon enough the bonds of trust build and they become fast friends. I think she might be my favourite character out of the gang,  Henry, on the other hand, he ended up that character that was way too mysterious, and became too bland for me to be interested. However, I did feel sympathetic towards him due to the circumstances.

There is no romance in this title as it mostly focuses on the political issues, but I’m glad it didn’t because romance in this situation tends to be over the top and too much. The Fixer is one of my favourites reads so far this year, it keeps you engaged whether it be through problem-solving, kick-ass main character who takes matters into her own hands, or through the decent dialogue. Some of the secrets of the book are maybe a little easy to decipher if you pay attention to the right things, but that doesn’t detract from the overall enjoyment.