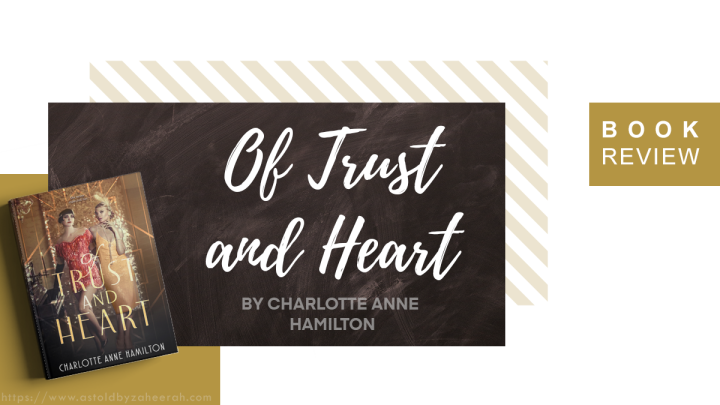 As the daughter of an Earl and fast approaching her 25th birthday, Lady Harriet Cunningham finds herself in a New York speakeasy when she should be finding a husband. That is until she sets sights on Rosalie Smith, a beautiful woman with a voice that blew her away. And now, she must decide between expectations or her growing feelings for Rosalie without ruining her family name.

Of Trust & Heart was highly disappointing. I personally found it boring, which hurts me to say considering I have enjoyed the author’s previous works a lot. Concept-wise, this story had a lot of potential to be a passionate and emotional tale, but its execution left it feeling messing and underwhelming.

Lady Harriet is sent to New York by her family in order to find a husband, despite knowing that Harriet is a lesbian. Aware of her predicament, Harriet finds solace in her cousin Charlie, a closeted gay man. Together, they bond over their inability to feel comfortable in their surroundings truly. Here, Charlie invites Harriet to a speakeasy hidden within a bookstore. One last night she promised herself before finding a man to settle down with. And when she meets singer Rosalie, her plans fall apart.

The main reason why I couldn’t really invest myself into the romance is that there’s nothing there to really root for. Harriet and Rosalie exchange mere words, Rosalie writes a song about her and then we are told how utterly in love Harriet is. I was expecting more from the two, interactions, inner thoughts, development, anything! Harriet spent more time with her suitors than she did with Rosalie. Everything was extremely flat, and the story failed to rise to the tension and conflict occurring within the story. The people, the locations and actions felt so impersonal and empty.
Despite my negativity, it was a quick read and somewhat fun to read, Hamilton clearly writes well, but I don’t consider this a great showcase of her writing. (I would recommend her Until Lambs Become Lions series) The ending is somewhat awkward, which I wouldn’t have minded if there weren’t clearly other ways of fixing their problems. With a prohibition-era backdrop, there is genuine potential for this story and that I just think it doesn’t reach its fullest potential.