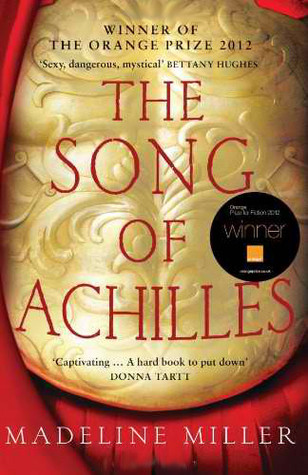 This is a breathtakingly original rendering of the Trojan War – a devastating love story and a tale of gods and kings, immortal fame and the human heart.

Song of Achilles tells the story of Achilles’ life and the Trojan War through the eyes of Patroclus, the beloved companion and lover of Achilles. This is their love story.

A new take on the Iliad and this novel, faithful in many ways to the characters and events of the Iliad stands on its own merit as a love story. I found using the POV of Patroclus to be particularly engaging. I felt sorry for Patroclus as he grew up: the son who always seems to disappoint his father, no matter what he says or does, always hearing from his father. I thought she did an especially good job presenting the evolution of the relationship between Achilles and Patroclus, the attraction growing as they grew up together. Their love–their relationship– is the heart of the book.

I think my favourite parts was when Achilles is just getting to know Patroclus, who reveal how he ended up in Achilles’s father’s care. Patroclus answers that he killed another boy who was trying to take something from him. Patroclus wants to know what Achilles would’ve done in that situation, and Achilles says something like, “I don’t know, because no one has ever taken something from me.” (For those who have read the Iliad, you know where I’m going with this) And then when questioned about fighting Hector, Achilles refusing, simply saying, “What has Hector ever done to me?” (Again, you know what I’m talking about.)

I also enjoyed the development of the character Briseis, the girl taken prisoner by Achilles and then taken from Achilles by Agamemnon, and how Miller handled her story. In the Iliad, we never really see them together and don’t get the idea that there’s any special bond between them until Briseis speaks at his funeral, saying she loved him. This novel, with its more intimate scope, shows us this relationship from start to finish. It also gives Briseis a personality of her own, which is tough when your only role in the story is that of human to be traded between other, more important, characters.

I think the biggest issue I had with this book was the representation of Thetis. I know the novel needed some sort of antagonist but I didn’t think she deserved to be presented in this way. Especially since we know how much she loves Achilles.

Simply put, this is an amazing written story of love and loyalty set amongst the wrath of the gods. An epic novel with action, adventure, a touching romance, mythological creatures, and displays of humanity covering the whole spectrum of good and evil. Absolutely loved it and will likely re-read it in the future (which is rare for me).

One thought on “BOOK REVIEW: The Song of Achilles by Madeline Miller”