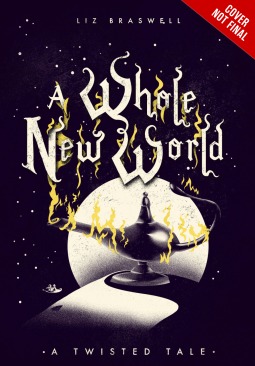 my review:
Rating: ★★☆☆☆
I had to think about this one and then decide how I was going to write it, but overall – it didn’t live up to it’s potential – mostly because the first 30% was literally a rushed version of the first 30 minutes of the original movie before the original material finally kicked in. The characters – old and new- were underdeveloped and the conflict didn’t emphasise what the actual stakes in the real story were. It had some good moments but, overall, not so good.

This action-packed book had a sufficiently built world, easily visualised, but what was lacking was characterisation. It was fast-paced yet, but I wanted it to be slower. There were also more than a handful of new roles in this story: friends and enemies but they were as flat as a board, leaving me feeling no sympathy for them in their crisis.

In this book, I didn’t really root for anyone apart from Morgiana—a kick-ass, witty female friend of Aladdin. She was my favourite character. Aladdin is supposed to be the charming, “diamond in the rough” street rat – who excels at thieving. Seriously—every time he tries to steal something he gets caught. I suppose it could be for narrative tension/suspense, but it felt sloppy. Jasmine is even worse. She starts off as a self-absorbed princess and doesn’t really lose that. Yes—she’s savvy; she’s a quick learner; she’s reflective—and she has moments where I can see what the author was trying to do – make her into a Katniss-type revolutionary leader. But it didn’t work right.

The relationship between Jasmine and Aladdin irked me so much. Yes, it happens in the film, but in this book, you could replace their name with anyone other YA couple, and it works. The whole romance felt very modern, very contemporary as if they were just two American teens with crushes on each other. It didn’t even sound anywhere near accurate. Even if they’re both orphans and impoverished street rats, I would still imagine that there are cultural customs and traditions in place – behaviour that’s inappropriate between two young, unmarried people.

As like the film, Jafar is our evil villain and even more so in the adaptation, and that REALLY irritated me. He doesn’t seem to have a backstory – there’s no reason why he is the way he is, and ultimately this drives him mad. I get that he’s supposed to be the villain, but again, this just seems to be “the easy way out.” It’s all right to have a good power-hungry dictator as your villain – but when there’s no reason, it just seems simplistic and sloppy.

The ending was typical. There’s a plan – a weak one – and our main characters band together to save the day. Of course. Despite the tension the author attempts to depict, there’s never really any doubt that Jafar’s going to lose and they win. Her best attempt at dramatic tension results in Jasmine being tempted by the dark magic – but luckily she has Aladdin there to draw her back to the light. It all resolves relatively quickly.

What really disappointed me was that this was such a fantastic opportunity to represent the cultural diversity that is so lacking in children’s and YA novels – to tell a Middle Eastern/Arabic tale with accurate cultural customs and beliefs – to show readers something probably unfamiliar to them in an appealing way. Since it’s based on Aladdin, it is already going to attract readers, it was a perfect opportunity to do so.