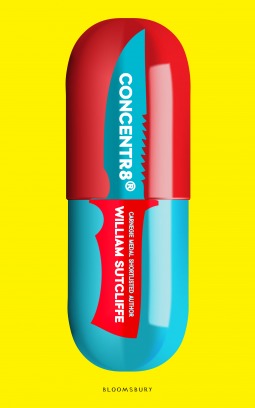 In a future London, Concentr8 is a prescription drug intended to help kids with ADD.

Soon every troubled teen is on it. It makes sense, doesn’t it? Keep the undesirable elements in line. Keep people like us safe from people like them. What’s good for society is good for everyone.

Troy, Femi, Lee, Karen and Blaze have been taking Concentr8 as long as they can remember. They’re not exactly a gang, but Blaze is their leader, and Troy has always been his quiet, watchful sidekick – the only one Blaze really trusts. They’re not looking for trouble, but one hot summer day, when riots break out across the city, they find it.

What makes five kids pick a man seemingly at random – a nobody, he works in the housing department, doesn’t even have a good phone – hold a knife to his side, take him to a warehouse and chain him to a radiator?

They’ve got a hostage, but don’t really know what they want, or why they’ve done it. And across the course of five tense days, with a journalist, a floppy-haired mayor, a police negotiator, and the sinister face of the pharmaceutical industry, they – and we – begin to understand why …

Concentr8 takes us into London, where the increase of attention deficit hyperactivity disorder (ADHD) in children and adolescents have reached epidemic levels. Concentr8 has been used by the government as a form of social control until the use of Concentr8 was abolished, wiping out the availability of its supply to the public. A group of teens kidnap a random worker from the Mayor’s office for hostage although it is clear that they don’t know why they did it or what they actually want by doing it.

Personally, Concentr8 had the potential to be so great, but it really wasn’t a readable novel. The multiple POV change too quickly for my liking, and at some points, I didn’t know if it was really that necessary to capture the perspective of every other character in the story. I hoped it would give a clearer picture, but it just didn’t work.  The narrative voices all sounded alike and would have been better off with one or two POVs rather than the mashup we got.

However, this book does have some strong points that are interesting to read in a YA novel. The psychology of nature versus nurture is a longstanding debate and this novel really work with the issues of ADHD and Ritalin. It’s a quick read, with an intriguing premise and well-imagined story, but it could have been executed better for me. Still worth a read though, for anyone interested.

One thought on “BOOK REVIEW: Concentr8 by William Sutcliffe”