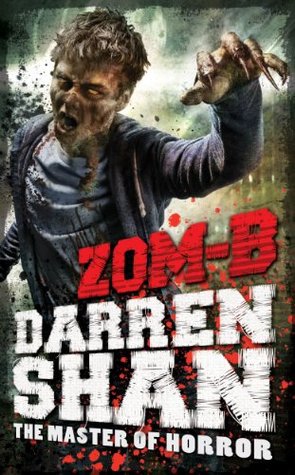 Zom-B is a radical new series about a zombie apocalypse, told in the first person by one of its victims. The series combines classic Shan action with a fiendishly twisting plot and hard-hitting and thought-provoking moral questions dealing with racism, abuse of power and more. This is challenging material, which will captivate existing Shan fans and bring in many new ones.

“Trust no one. Always question what you’re told. Don’t believe the lies that people feed you, even if they’re your teachers or parents. At the end of the day you have to work out for yourself what’s right or wrong.”

I would just like to disclose that I love Darren Shan’s books. The Saga of Darren Shan inspired me to become an author and is one of my favourite vampire series ever. But I’m just so disappointed with this entire book, and I’m not sure if I want to continue the series.

The summary says it’s ‘a hard-hitting and thought-provoking moral questions dealing with racism.’ But honestly, it was all bullshit. As a Muslim, who has grown up in the UK, I am so thankful I’ve never faced people like B in my life. I don’t tolerate racism in real life, and nor will I tolerate it in fiction unless it educates the readers. I felt like Shan should have written those scenes differently

B is literally a TSTL character with no redeeming quality. With a non-existent moral compass, B literally has no sense of right or wrong. They pretend not to be racist, but really was, and was extremely cruel to anyone. There’s a scene where they tried to buy alcohol but is denied because they are underage, so they made fun of the Arab man when he denied the sale. A teacher makes a comment about their racist dad, so they slashed the teachers’ tires?

B is also a huge bully. I had really hoped B would grow up and realised their racist behaviour, and hopefully, stop acting in that way. But they don’t, and blames it all on their dad and is weirdly hellbent on pleasing their dad. Later, when the zombies are overtaking their group, B‘s dad tells them to sacrifice the black boy to save themselves, and B actually did it. Then blames their dad, despite the fact that it was their action.

‘He turned me into a killer. He made me throw [….] to the zombies.’ Ummm, B, your dad didn’t make you do shit. B easily had the choice to say no, but they didn’t. And once they come to the realisation that everything they had done was wrong. It was too late, and honestly, B got what they deserved.

The novel does show what influence poor role models can have on children’s behaviours, but honestly, B’s character was too inconsistent, and the likeability in this character was way too low. The art in the book was actually really great, and I liked them. Overall, the zombie scenes were few but were good, it’s just damn shame than B’s is so unlikeable that I’m not sure if I want to continue this series.