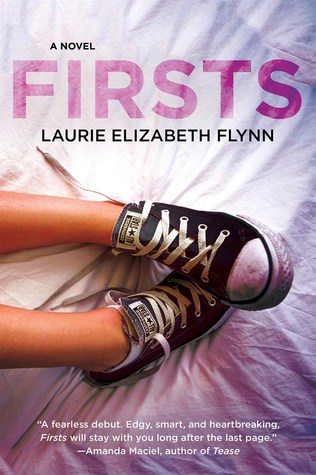 Seventeen-year-old Mercedes Ayres has an open-door policy when it comes to her bedroom, but only if the guy fulfills a specific criteria: he has to be a virgin. Mercedes lets the boys get their awkward, fumbling first times over with, and all she asks in return is that they give their girlfriends the perfect first time- the kind Mercedes never had herself.

When Mercedes’ perfect system falls apart, she has to find a way to salvage her reputation and figure out where her heart really belongs in the process. Funny, smart, and true-to-life, FIRSTS is a one-of-a-kind young adult novel about growing up.

I’ll start with what I did like so it’s not lost in whatever comes next. The style of writing made it easy to read, it’s light and fluffy, and serious when it needs to be. Mercedes was an interesting main character, I didn’t like her, but it was nice to read a YA contemporary that’s quite different. Firsts make a lot of promises, and the potential was so obvious.

I wanted this book to be so about empowerment but it was so bad how lacking the empathy was towards the females vs the amount of care was taken into sympathising with the boys she slept with, especially since they cheated on their girlfriends with Mercedes. But I felt so bad for her when she receives the brunt of the abuse from the girlfriends.

Mercedes logic behind why she’s provided her service is understandable, but again it lacks any proper exploration until the very end where it’s delivered in the biggest info dump ever. She never once tells her experience to the girlfriends or attempts to clear the air on why she did it. I get that they’re extremely mad at her, but considering how strong she was in her justification of her own actions to herself, I just thought she would try at least. Like her reasoning makes sense, but at the same time, I was sitting there thinking, you’re sleeping with people who are already dating other people.

Also, the character of Faye felt so forced and was such an obvious plot device to put Mercy and Zach together. (Mercy’s like oh this new girl is hotter than me, Zach is obvs going to like her better than me, despite Zach being so blatantly obvious about his feelings towards Mercy)

I think the biggest issue I had with this novel was the message it sent about consent. Twice Mercedes tells boys to disregard consent, and completely misrepresents consent and confuses what is a very clear case of rape. And it isn’t really addressed and questioned.

Overall, a novel that was filled with potential. This novel is set in our modern world where women are valued as object based solely on their sexual availability to men. I understand where Mercedes was coming from, but this book wasn’t for me. Don’t be bogged down by my low rating, it’s good because the book does point out an important double standard about sexually active girls and teen boys and does portray a realistic and challenge to slut-shaming and double standards.