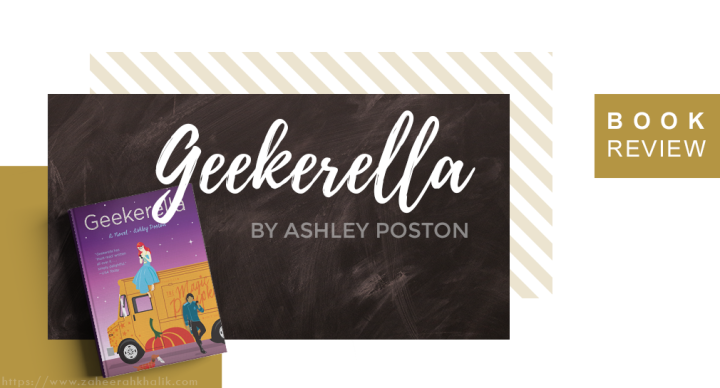 Elle lives, breathes and blogs Starfield. But her step-mother and sisters think otherwise. So, when the opportunity to enter a cosplaying competition comes up, she takes it, she just needs to find a way to get there. Darien Freeman is an up and coming actor and playing Starfield’s Carmindor is a dream come true. He just needs to prove it. But it isn’t easy when the fandom has already shrugged off the teen actor, and a cruel blogger aims to undermine his every move. One wrong number leads to a connection none of them would’ve expected.

I was very surprised by this book, and mainly because I actually enjoyed it more than I had anticipated. I always hold “fandom” books at a distance, mostly, because I often find them cringey, outdated, and never really that representative of fandom. The title alone already had me on edge, but I adored Geekerella.

Elle was a sweet lead, who blogs about Starfield and isn’t exactly happy about Darien being cast. And like a blogger, she takes to the internet to voice her opinions. I absolutely loved how Elle experiences fandom, and it was quite real and actually relatable. As a teen, I was in Elle’s position too, but instead Starfield it was multi-fandom Tumblr. (Imagine 2013 circa Tumblr) And this is where the book shined. It was a fantastic experience that felt like my own personal ode to my own personal fangirl experience. It was incredibly relatable, the conventions, the speech. The book really encompasses the general gist of positive fandom, while also addressing negative aspects quite well.

Darien was a pure sweetheart, who really wanted to do well by Starfield, but couldn’t do so due to contractual obligations and an overdemanding dad-manager who only sees this as a career boost. I was sort of more leaning towards him parts of the story because it discusses whitewashing in film and his experiences of being a non-white actor.

Geekerella is a light romance. I really enjoyed how the story of Cinderella is retold within the context of a big movie adaptation. The romance can get little too much, but honestly, it isn’t as bad as people make it out to be in more negative reviews. A lot of people are calling it unbelievable because they interact with each other through texts. In the context of Geekerella, it’s understandable because neither make an attempt to actually see the other, not even via web calls or anything. But to say every relationship made via online media is inauthentic is a pretty shitty take, and that seems to come up a lot in reviews for this book.

Overall, it’s a pretty decent book. An adorable modern update of Cinderella set in fandom and reboots. I really enjoyed the accurate depiction of contemporary day fandom. Though mostly predictable, it’s somewhat entertaining, and I enjoyed it a lot more than I had expected.