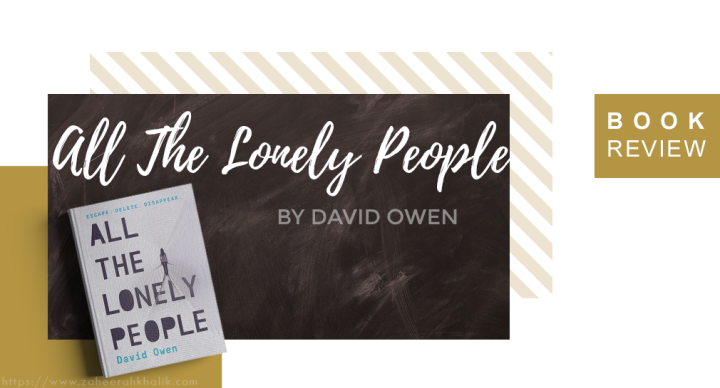 *I received a copy via the publisher via NetGalley in return for an honest review. This in no way affected my opinion of the book.*

When Kat becomes the target of an alt-right smear campaign, she has no choice but to erase her entire online presence. Suddenly, Kat is fading, and only The Lonely People know what to do. Wesley realises that people are forgetting Kat and he has to help her, even if he was partially responsible for it.

I think what was best about this book was the portrayal of the toxic parts of the internet. These people who spew negative, hateful things into the world have solid fan bases, often young kids. Kat is one of the newest victims of a right-wing YouTuber who enables his fanbase to act violently, to hack into her website, her safe space, and completely violate her privacy.
Kat’s entire arc was the story for me. She’s created this online side of herself where she’s free to speak about anything she wants. She discusses fandom positivity and the beauty of the internet. And then it’s gone, and she had to work with Safa, a fellow faded person, to discover what to do next. Her chapters were more interesting to read.

Welsey is a part of the boys who look up to these YouTubers, act on their behalf on these so-called man-hating feminists who want to get rid of them. He’s very much aware that what he’s doing is terrible, and what was irritating was how he never really owns up to what he’s done. He often blames his surroundings, his upbringing which caused him to find friendship in an alt-right fanbase. Kat seems to be the only person with sense and often calls him out, not outright because no one can interact with a faded person. The ending suggests Wesley works towards becoming a better person. But, personally, I found it difficult to forgive.

The outright dismissal of online friendships was a downfall as well. Kat essentially fades because once her site is shut down, she has nothing, no other connection to people, therefore begins to fade. It comes across as seeing online relationships as less authentic and not real. And it’s quite dangerous in this book because it does show how real the internet can be, how anyone with a large enough following can have people do their terrible bidding. It’s not as nuanced as the book believes it is.

All The Lonely People certainly is unique. The notion of fade to represent feeling invisible while discussing online culture in our current digital age is fascinating. It’s a shame I didn’t enjoy it as much as I wanted to.