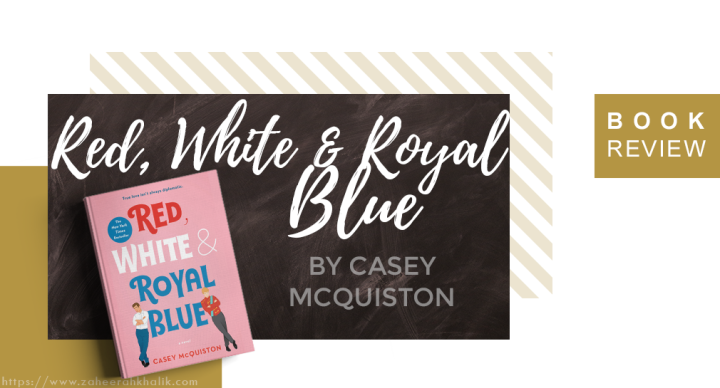 First Son Alex Claremont-Diaz finds himself falling in love with Prince Henry of Wales after an accident launches their non-existent friendship into international light. Damage control turns into an unlikely friendship and with his mother kicking off her re-election bid, the choices Alex must make can upend everything his family has worked for.

RWRB was strangely entertaining. I dived in not expecting much but came out with a good laugh and a feeling of warmth. McQuinston creates a world in which Trump never happened and instead, the first female president was elected. Alex is proud of his family and will do anything to help them. And that even means putting aside his disdain for Prince Henry for the sake of American-British relations.

Contemporary books that try to get with the current lingo often come across as embarrassing. But RWRB made it surprisingly work. Alex was a hilarious main lead. He’s very full of himself but I’m saying that in a nice way. I personally didn’t like Henry, he just came across as a stereotypical British person. But their relationship together was pretty sweet. Henry is gay, but Alex is questioning his sexuality for most of the book, before coming out as bisexual. They work really well together, and they try their bests to help each other out, despite the circumstances. The side characters are really great to read. I really enjoyed the strong sibling relationship and the whole unlikely yet supportive friendship group that develops in the book.

The political backdrop will be a hit or miss for some readers. I’m sort of in the middle. I feel like this book wanted to stay completely on the romance path but couldn’t ignore the political context in which it’s set in. I wasn’t exactly a huge fan of it,, but I particularly loved the message that Alex sent about being a non-white person in America and how the melting pot that is the country is what makes America and diversity should be celebrated, not shunned away.

I didn’t really have much issue with this book. Adiba Jaigirdar says its more eloquently than I ever could, but because this story is essentially these two people, children of national figures, falling in love. And one of the people being a member of the royal family, you’re given this idealised image of British royalty. An empire which has committed many crimes against humanity. McQuiston does acknowledge the awfulness and Henry is aware of this privilege but positioning him as this ‘not like the others’ prince really wasn’t cutting it for me. But I don’t think I’ll knock off anything from my rating for it, it’s just a personal taste.

Overall, I personally really enjoyed it. Another review called it a “bookish security blanket” which is rather fitting. It’s hilarious and heart-warming. I found myself engrossed at most. I would definitely recommend it for anyone looking for an international royal romance.