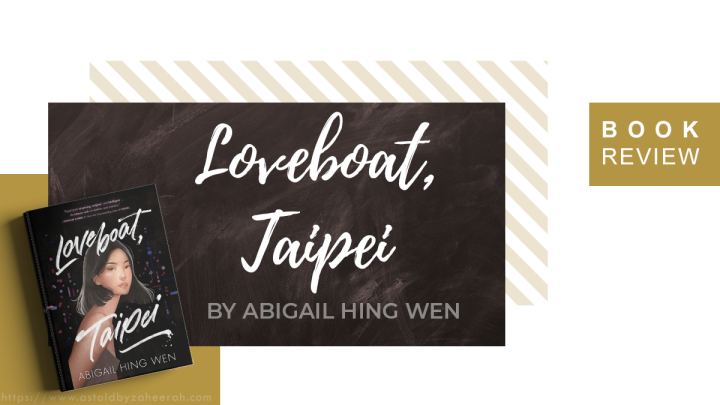 In her parents’ last effort to prepare her for a future in medicine, they send Ever to an educational program in Taiwan, hoping it would distract her from spending her last summer dancing. But what her parents don’t know is that the program is also their worst nightmare. Here is where Ever discovers the educational program is also known for its love boat reputation, where summer-long flings are the norm, and the nightlife is second nature to its student. Ever is eager to rock the boat and make it her mission to have the best summer ever.

Romantic contemporary is far from my usual genre to read, but Loveboat, Taipei really stood out to me. I went into this with low expectations but came out feeling a really strong connection to Ever and her journey. Her passion is to dance, but her parents hope for her to take a career in medicine. So when she is forced to decline her dream university spot and go to Taiwan to improve herself, she’s discouraged and upset. That is until she realises that without her parent’s supervision, and even when their influence lingers, she is free to make her own choices with little consequences.

What made Loveboat, Taipei stand out for me personally was Ever. After being contained by her parents for so long, she struggles to find out who she is without them. Her time in Loveboat is her worst and best. She breaks all the rules her parents set out for her, reflects on them in a rather thoughtful and relatable way. The way Abigail Hing Wen writes makes you feel right at home. I felt for Ever, her thoughts reflected my own, and I was surprised by how much I saw myself in her.

“I never talk to my parents about the books I read or the music I love or the dances in my head. I can’t trust them not to take what bit of soul I offer them and hurl it into a dumpster.”

The plot was quite enjoyable, to say the least. I won’t lie; I was lost at the start because I genuinely had no idea what was happening. And then it takes a drastic turn that was surprising, but the story comes into its own. Ever breaks many of her parent’s rules: no drinking, clubbing and getting close with boys. She takes a leap of faith and becomes embolden by her time in Taiwan. When Ever arrives in Taiwan, she immediately hits a block and finds herself feeling isolated within her peers, other teens from wealthier backgrounds. But she isn’t the only one hiding secrets. Rick Woo is the bane of Ever’s entire existence, having remembered him from a childhood memory that is burnt into her mind. Perfect boy with a perfect life, family and girlfriend included. But Rick is carrying an onerous burden. Sophie Ha is boy-obsessed and Ever’s right-hand man into Loveboat. Her want to find a relationship reveals a heavyhearted past. Xavier Yeh is loveboat’s honorary bad boy whose character surprised me the most. The Second Lead Syndrome was strong in this one. They all come together to make a summer of memories that will change them for the better.

Overall, Loveboat, Taipei was a refreshing coming-of-age novel that was fun and fast-paced. The story delved into some themes such as mental health, abusive relationships and racism, which can feel heavy to process, but Abigail Hing Wen does it with justice and clarity. Ever’s story is about coming to herself, and I enjoyed every moment of it all.