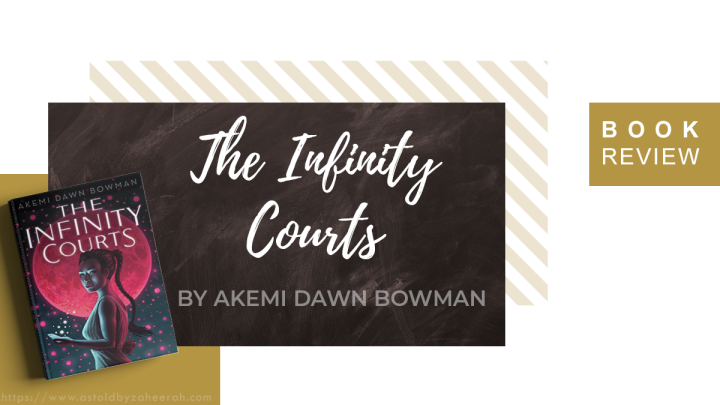 Nami Miyamoto was ready to start the rest of her life until she is murdered. When she wakes up, she discovers she’s in the Infinity. In this place, human consciousness goes when the physical body dies. Everything seems perfect until she realises that Ophelia, the (Siri-like) virtual assistant used on Earth, has taken over, forcing humans to serve her the way she had served them on earth. And she is close to destroying all human consciousness permanently. Nami must work with a band of human rebels to stop it all before they lose everything.

A part of me is so disappointed that I have to write this review mainly because I was so excited about this book. From the outset, everything is right up my alley. When I finished this book, my first thoughts were, maybe I’m too harsh, but after sitting on my thoughts for some time, The Infinity Courts was disappointing. There are some moments where the book got my attention, but that was only towards the end.

To start, the writing was not working for me at all. I have read Bowman’s previous works, her writing is brilliant and it’s a shame I couldn’t feel it here. In fact, I would implore you to check out her other books and don’t let this review put you off her work. The writing just didn’t feel right, the story drags itself, and Nami’s voice is so dull.

What I liked most about the story was the concept. What makes this book different is how Bowman takes the idea of what lies beyond death, and it hooks you in straight away. Nami immediately discovers something is not right within the Infinity. I was definitely rooting for her from the start until her thinking just doesn’t add up. She shows a lot of sympathy to the enemy, who we are told are not good people. Hell, they’re not even real. I actually respected her position on finding a middle ground, especially since Ophelia is the real cause of damage between them. Her being upset that she is thrust into a chosen one position is understandable. But she just doesn’t seem to show any sympathy towards the human cause. Her attitude was rather frustrating and confusing, and it made me not want to be invested in her journey at all.

These people have been fighting against Ophelia for years, and she enters acting as if they’re bad for wanting revenge. She’s very empathetic towards the enemy but doesn’t even think of the people who saved her until it personally affects her. I found myself rooting for the side characters more than the main lead. And nothing is explained at all; we’re just expected to roll with it.  If it wasn’t for the amount of plot armour that was protecting Nami, she just wouldn’t have survived at all.

The Infinity is a space created by human consciousness. It’s split between sections, ruled by the sons of Ophelia. The story takes place mainly in the court of Victory, run by Prince Caelan, while his brothers lead Famine, War and Death. The world-building was the best part of this entire book. Personally, I loved the overall concept of the world; it was fascinating to see how the Courts worked. Before Nami arrives, there is obviously a lot of history. The book takes a lot of easy way out to explain stuff to get through the necessary worldbuilding. Which is what also made it disappointing. Nami shares a connection with another to learn everything about the Infinity that the readers aren’t really privy to and then expected to accept what’s happening.

Overall, The Infinity Courts’ concept is definitely something else, almost remarkable, if not let down by the characterisation. An interesting enemy, a complex world, the ending was incredibly fantastic, and I could’ve practically forgiven the book if I wasn’t so disappointed by the journey to get there.

One thought on “Review: The Infinity Courts”