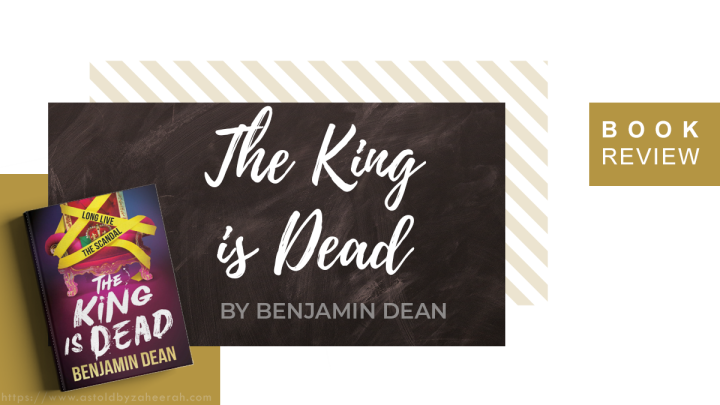 When his father unexpectedly dies, James is suddenly thrown into the spotlight, days away from being the first Black heir to the throne. And the world is suddenly very keen on the eldest son as the papers begin to lash out at his ascension. As a prince, he has had his fair share of terrible tabloids, but when his secret boyfriend disappears, and suddenly everything he thought was private is splashed out on the front pages, can James find out who is betraying him, or will the weight of the crown be too heavy for him to bear?

The King is Dead is meant to be a mystery thriller, and I can’t help but feel disappointed at the lack of energy throughout the book. Although the opening scenes gripped my attention, beginning with the king’s death as James and his family come to terms with what it means for them. The instant action grips you immediately, but after that, it feels lacklustre.

There are plenty of plot twists and turning points; although only one shocked me, the rest feels uneventful and almost predictable. I never see an issue with guessing the ending; the thrill of reading it is how the story gets there, and The King is Dead just takes you on an underwhelming ride of telling the reader everything that happens instead of showing it. A lot is going on in this as James is trying to find out who is leaking information; he is also dealing with the press, his boyfriend who has disappeared, and his rocky relationship with his twin brother. There is so much going on, but it felt like reading separate stories that haven’t fully been incorporated well into one account. The stakes were undoubtedly high, but the tension was not there, and all the plot points lacked development.

Although I have to say, I mainly did enjoy how Dean used his experience as a celebrity reporter as his portrayal of the British media was quite spot on. You can see the influence of the current Royal family on James and his own family as they face the brunt of the tabloid’s anti-Blackness while his (white) family members remain unscathed. The strength of this book came through in these moments as James came to terms with the relationship between public figures and the media. They claw at any information, even going as far as outing a seventeen-year-old child and attacking his mother, their queen, by the racist comparisons between her and the King’s former wife. It echoes the experience that Meghan Markle faced during her time in the Royal Family. Dean’s writing shines through in these moments, which is why I felt so disappointed at finding the rest of the story somewhat lacking in comparison.

Overall, The King is Dead wasn’t necessarily a bad book. There is mystery and drama that will satisfy most readers. Dean had some great ideas for this story; with some expansion and rework, I could have seen myself enjoying this a lot more. Nonetheless, it’s still a quick, fun novel, but it wasn’t for me.