“Americans love labels. They help them know what to expect. Sometimes, though, I think labels stop them from thinking.”

Jude is only twelve-years-old when she leaves Syria to live to live with her uncle’s family in the US. Being the only student who looks like her, she begins to discover that she isn’t seen as a normal girl like her peers. Told in verse, Other Words for Home follows her journey to understanding her new label of “Middle Eastern” while also finding herself.

I adored this book. Jude is the sweetest protagonist and her story was so inspiring and relatable. Growing up, Jude was obsessed with movies and becoming a star, so she is obviously surprised when she must move away from her coastal home when it descends into a civil war. Along with her pregnant mother, she must leave her family, father and brother, behind, and comes face-to-face with the life she had thought she knew from the movies.

Her life in the states is new but straining. Her cousin Sarah makes no effort to help, her aunt tries her best, and her new peers see her as something different. She reminds herself of her brother’s goodbye message. “Be brave.” Slowly, she grows to enjoy her new classes and even makes new friends in her ESL classes where they all bond over their experiences of coming to the states. Much to her cousins’ dismay, she even auditions for the school musical. Jude is such an insightful narrator; her confidence, her insecurities and her confusion all come through in the pages.

Other Words tackles tough to talk about topics like Islamophobia and Anti-Muslim rhetoric. The way it manifests in Jude’s life is so subtle and real, like Jude realising how people actions towards her suddenly shift when she begins to wear the hijab. The book takes on the idea that not all Muslims shares the same experience, and this is just Jude’s story. There was something comforting reading about a young Muslim girl experiencing her spirituality on her terms. You don’t get that often. Her fear and confusion were portrayed so well, something that I experienced a lot as a Muslim kid growing up which makes this book a lot more special.

Overall, Other Words for Home is a story of becoming and belonging and what it means to be yourself in a society that would rather see otherwise. A middle-grade read that tackles topics like war, refugees and prejudice, a definite recommendation for younger children and older teens.

*I received a copy via the publisher and NetGalley in return for an honest review. This in no way affected my opinion of the book.*

Years after The Gauntlet, the Architect returns with a new partner, MasterMind, to take revenge on the Mirza family. Now twelve-years-old, Ahmad Mirza must face their latest creation, The Battle. Ahmad is forced back by the Architect to a brand new Paheli. A slicker and more modern update raises the stakes, and with New York frozen in time, Ahmad must beat the game again before it beats him.

Like the first book, the story is structured around three challenges that Ahmad and Winnie must complete to defeat MasterMind’s game. Riazi again gives readers not much time as our characters must rush all over the city of Paheli. Ahmad remembers little from his past adventure, so he’s just as confused as Winnie is. What definitely carries on the from the debut is the fast-paced mix of monsters and high-stakes battles for survival. I loved the descriptions of the new Paheli, it’s an entirely new landscape with some familiarity with Ahmad and returning readers. The world-building of the novel and game design shines through. The old Paheli isn’t there anymore, but parts of it still manage to linger with a more significant emphasis on the steampunk design this time around. I enjoyed the level of detail given to the setting. I’m obviously not the intended audience, but this book is good fun, full of action and adventure.

A similar issue I had with The Gauntlet was the disparity in characterisation between the lead, now Ahmad, and its secondary characters. The Battle introduces Ahmad’s classmate, Winnie, as his companion into Paheli. Throughout the novel, you really get a feel for Ahmad and watch him grown as a person, but Winnie is not as fully developed. She’s a smart and confident girl but doesn’t really impact the story as much you’d expect and felt like a paper character meant to just tag along with Ahmad.

Overall, I have no doubt that younger readers will enjoy the new Paheli landscape with high-rise landscapes, flying cars and familiar faces. A surprising reveal at the end makes me wonder where the future of Paheli could lead.  I personally didn’t enjoy The Battle that much which is quite disappointing, especially when I adored the first one. I absolutely loved The Gauntlet, but its sequel doesn’t match up with the magic of its predecessor. It is a solid and fascinating return but to those who loved the world created before may be disappointed by its execution.

the mermaid’s voice returns in this one – amanda lovelace

A powerful and empowering conclusion to the Women Are Some Kind of Magic trilogy. I wasn’t too sure about this reading especially since I didn’t particularly enjoy the second book that much, but I knew it would bug me to not complete a series that is short like this one. The one thing I liked the most about Lovelace’s work is how she uses the concepts of fairy tales, subverting traditionally submissive stories about women and reinventing them in her own way. I guess, and it isn’t Lovelace’s fault, the style really doesn’t do much for me anymore. I can’t really fault her on this structure being so overused in popular poetry books.

Rilakkuma: By Your Side – Aki Kondo

Two words: Cute and simple. By Your Side is a series of different everyday scenes of Rilakkuma and his friends. It’s pretty sweet, a simple quote book filled with adorable art of the well-loved cartoon characters. It’s a book I would keep at my shelf and look through if I’m feeling down.

Don’t expect a lot from this book, it’s mainly pictures with some inspiring quotes alongside it. But it’s delightful and optimistic. I believe this was released in anticipation of Rilakkuma’s upcoming Netflix series, which I did not know what happening. And now I’m pretty excited to watch it.

Barely adjusting to her new home in the Upper East Side, Bangladeshi-American kid Farah finds herself sucked into the game of The Gauntlet of Blood and Sand after her younger brother, Ahmad, vanishes into the game. Alongside her friends, she must complete three challenges and failure to win will trap them- and Ahmad- forever.

I’ve been anticipating this book since Salaam Reads was first announced. And I can definitely confirm that this book was so worth the wait.

I really, really enjoyed the world building and game design. The way the story is mapped out is really brilliant. I hope to, maybe, see a graphic novel of this series somewhere down the line because of the Middle Eastern and South Asian influences Raizi had made a very dazzling and creative world. The way the world moves in pieces like a game was so pretty to imagine.

Farah is pretty headstrong and a loveable lead who is very aware of her own weaknesses. She’s constantly struggled with her want to ditch the challenge in search of her brother versus her need to navigate her and her friends out of the game. And she works alongside her friends to complete each challenge. Their friendship is very cute and they work well together, recognising each other’s strengths and weaknesses. They’re all very intuitive and logical in situations that would have me in tears. (ahah)

I think the only downside was the lack of characterisation for Essie and Alex. Farah’s character comes out really strongly and the other two do come across as being more archetypes rather than their own persons. Also, its cultural aspects were so adorable and great to read. While the world seems almost alien to her friends, Essie and Alex, Farah finds familiarity in it and so did I. I wished this book existed when I was a kid.

Overall, it’s a solid fantasy debut in an exciting game world. At its heart, a story of family and friendship, making it a great for any young readers. 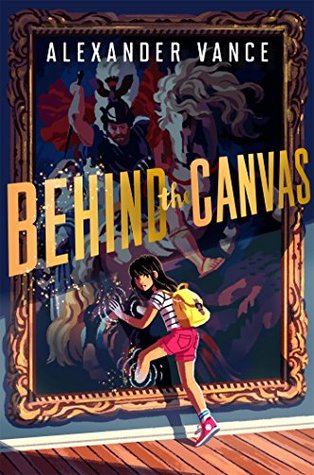 Claudia loves art but never truly understand what’s really under the surface until Pim appears in the painting she sees. She learns that Pim has been trapped in the world behind the canvas for centuries by a witch, and Claudia is now his only way to break the spells that keep him bound in the world of art. Using ancient magic, Claudia enters the world but finds that nothing is truly as it seems on paper.

Behind the Canvas was an exciting read, a really cute story that was filled with adventure. I really liked the anecdotes that appear at the end of each chapter after an artist was mentioned, it was a cool addition to the story though I felt some notes do drag on a bit and take up a bit of space but you do learn some interesting things if you don’t know much about art, like me. They did at first appear too academic to grab my attention but they’re actually really witty and do give better contextual knowledge. What I loved the most was the concept and how it wasn’t set in a random fantasy place but actually links with the real world and the way it works shows clear and deep thought in its creation. (Let’s just hope no one tries to  place their hand with yellow gloop on the actual Mona Lisa…)

However, I felt like the relationship between Claudia and Pim was severely missed out. It skims part where they get to know each other and I felt it should’ve developed that section a bit more to see how their friendship grew but, nonetheless, the way they really cared for each other did come through. I just felt like it was missing something in the beginning.