Victor and Eli began as college roommates, almost friends, where curiosity leads to near-death experiences and development of supernatural powers. Ten years later, Victor breaks out of prison determined to exact revenge on his old friend. Both are armed with terrible controls, a product of their actions ten years prior, but who will survive?

I think I’ve found a new favourite book. And I haven’t found one of them in a while. Vicious was a delightful surprise. I have never read a V.E (or Victoria) Schwab before, and Vicious sounded like the safest options out of all her books to try. And, is this what all her books are like? Because you can now count me in the Schwab hype train.

Vicious from the get-go was so different. A true twisted tale of a friendship gone wrong. Victor and Eli, former friends, now current foes, are reunited after Victor breaks out of prison for revenge. Both developed supernatural powers from experiencing near-death experiences. In their case, they forced it to happen to test a theory that Eli was developing. Eli believes his capability puts him above others and sees others like him as a rodent that must be exterminated. And Victor may be the only person that can stop him.

Victor and Eli both see themselves as the hero and the other the villain, but neither can be categorised as good or evil. And that’s what makes me them so appealing. Schwab really is a killer at this. The story unfolds in a way that would appear disorienting, but it’s deliberate, and it works well. The constant jumping back and forth between everything, it goes from their time at college, their time in prison before bouncing back to the present time.

Overall, I loved Vicious. It’s a grim tale that had me gripped from the beginning all the way to its sinister ending. A story of corruption with its evil moments and moments of sweetness that worked well. Extremely thrilling with a cast of complex characters, Vicious was a difficult book to put down and once finished, I never wanted it to end.

* I received a copy of this book from the publisher through NetGalley. This in no way affected my opinion of the book.

The Miseducation of Cameron Post begins at the end of her parent’s life. Cameron is relieved because now they’ll never know she had a kissed a girl. But the struggle doesn’t end there, we follow Cameron from the ages of 12 and as she grows to 16. Life is different, but Cameron is an expert at blending in. Until she meets Coley Taylor. And then one thing leads to another, and Cameron’s forced to join a conversion camp by her ultrareligious Aunt to “fix” herself.

This was a very detailed and passionate read. The story shifts with its array of characters, each vibrant and different from one another. The story starts off with a summer fling, a more happier vibe, where everything seems to be going well. Until it takes a dark turn and punches you straight in the stomach. While I didn’t find it emotional, but nonetheless, it was difficult.

For me, there are two parts to this story. The first is Cameron coming to terms with her sexuality and learning who she is. The second is where its all ripped away from her, and she’s forced to join a conversion camp. There’s a middle lull in this book where nothing really seems to happen. And this is where, from other reviews, everyone seems to drop off from the book. I’m not going to lie, even my interest started to falter after a few chapters but I held on and I’m glad I did, but I don’t expect anyone to force themselves through a book they find slow.

I can’t speak for certain rep in the book, like the Native American rep. I’ll link to this post that speaks on it much better. There’s a lot of language that’s quite negative towards Native Americans and very ableist so watch out for that.

Overall, Cameron Post was an intriguing read, while I didn’t love it, the story is important.

Natasha has 24 hours to save her family from being deported to Jamaica. Daniel has 12 hours to decide whether he really wants to follow through with his Korean parent’s life plan for him. Moments after moments leads to the two meeting on a crowded New York street and the moments after show how they go on to change each other’s lives.

TSIAAS is one of those books where I’m genuinely in the middle. Like I didn’t enjoy it, but I didn’t absolutely love it. I feel like there’s a bit of switch here for me. In Everything, Everything, I really enjoyed the beginning of the novel but found it’s ending was a bit disappointing but in TSIAAS, I found the beginning rather dull but it quickly picks up and finished quite well.

I’ll start off with the good. And there’s plenty of that in this book. It’s quite a touching read. I was more heavily invested in each character’s side story than their romance. Natasha and her rush to save her family and Daniel’s clash with his love for poetry and his parent’s approval. Natasha is logical while Daniel is a dreamer. It really is beautifully written. There are even inserts of other perspectives who intersect with the main lead, which would’ve been a distraction if I actually enjoyed the romance, but they enhanced the story, in my opinion, and added to the message of how everything impacts everything. Despite Natasha and Daniel being at odds with each other and their immigrant families, they find a connection which allows them to indeed be truthful to themselves.

The immigration aspect of this novel was what shined the most. It covers and explains how flawed the system that can be to those who are the least danger to it. Natasha’s whole life is being torn down because she’s forced to leave because of her father’s mistake.

What really put me off this book for so long was the romance. Of course, it was going to pull off an insta-love plotline when Natasha and Daniel only have twelve hours together. If you’re a reader that enjoys whirlwind and fast-paced romantic stories, then I have the book for you. But I just didn’t buy it. But I did appreciate the ending a lot, and I was actually really pleased with how it ended. Daniel, while a dreamer and sweetheart at his best, is literally quit obsessed with Natasha from the second he sees her. Their meeting and beginning scenes felt very off and borderline creepy.

Overall, there is clear praise for this book, and I can’t deny it of that. I just don’t think it was a strong enough book regarding its romance. But there’s a lot that I can’t deny that was great. TSIAAS discusses race in regards to the American Dream and the impact of parent-child relationships. The way Nicola Yoon jumps into different bystander’s voices without affecting the main plot brilliantly done and how we are all connected in some way or another.

* I received a copy of this book from the publisher through NetGalley.  This in no way affected my opinion of the book.

A future where a global epidemic is spreading and causing the world’s population to lose their shadows and later their memories. Husband and wife duo Ory and Max have managed to hide from the brunt of the disasters. That is until Max loses her shadow. Armed with just a tape recorder to document her memories, Max leaves their abandoned hotel. And Ory sets out on a dangerous journey to reunite with his wife. The chapters alternate between the two and two others, another survivor and another person known as “The One Who Gathers.”

The Book of M is a messy read, and I mean that in a good way. A story where each chapter ends with another hundred questions to ask. We follow Ory and Max survive in different circumstances. Max is running anywhere Ory can’t find her and then goes in search with a group of people for a cure for her memory loss. Ory, in search of Max, ends up in various dangerous circumstances where he finally interacts with the world that he, up until now, had ignored under the safety of his area. He meets the good, the bad, makes new friends and finds old ones.

The Book of M was a strangely riveting read. The writing is vivid which compliments and adds the foreboding world building. The story starts with the world in an unknown position, and as the book switches between the four different perspectives, the world comes back to together, providing different views on a world almost forgotten. It read like a puzzle, one that slowly meshed together and once it did, it was an absolutely fantastic book to finish.

Overall, while I did have some issues with the pacing, especially towards the middle of the book, The Book of M was still an engaging and imaginative read.

Content warning: blood, death, violence, the use of the “bury your gays” trope. I know I’m missing quite a bit but if you’ve read the book, please tell me if I’ve missed something out. 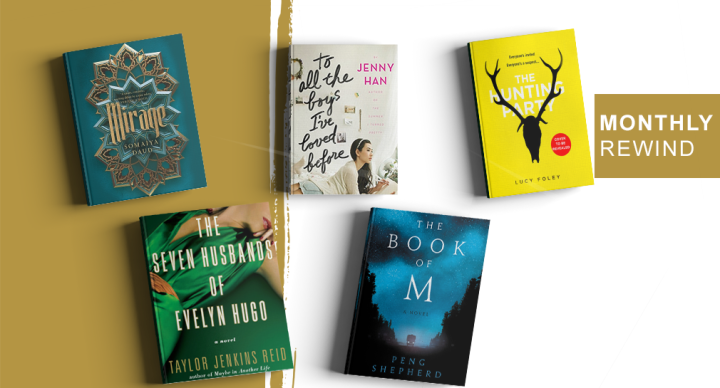 Mirage by Somaiya Daud (4/5) – Mirage was a solid debut which kicked off Daud’s duology with a bang. In a world of magic and constant danger, Amani is forced to become a princess’s body double and to survive the threat that is the Vathek Courts.

That’s Not What Happened by Kody Keplinger (3/5) – Six school shooting survivors recall the day their lives changed forever and realise that not everything was as black and white as they thought.

Teaching My Mother How To Give Birth by Warsan Shire (5/5) – There’s a haunting quality to Shire’s work that I really enjoy.  The beauty of her work leaves you stunned with every word.

No one leaves home unless home is the mouth of a shark. I’ve been carrying the old anthem in my mouth for so long that there’s no space for another song, another tongue or another language

END_OF_DOCUMENT_TOKEN_TO_BE_REPLACED

A Wrinkle in Time by Madeleine L’Engle (3/5) – From what I can tell, this book is clearly a beloved children’s series in the US but here in the UK, it isn’t as popular. I wasn’t even aware of this book until the film project was announced. But this is a really cute and fun story, I kind of wish I had read this as a child. (I vaguely remember my primary school focusing on UK authors when it came to English and reading groups)

One of Us Is Lying by Karen M. McManus (3/5) – The first half of this book was soo good, it was really engaging and fun but I felt a bit disappointed towards the end.

The Unit by Ninni Holmqvist (2/5) –  Interesting plot but I found it a bit too ambiguous to really enjoy it.

Final Draft by Riley Redgate (5/5) – Stolen from my review of Final Draft: Final Draft is a coming of age story about grief, first love and self-love as Laila learns to manage the fear that holds her back. It’s very relatable, straightforward and entertaining to read.