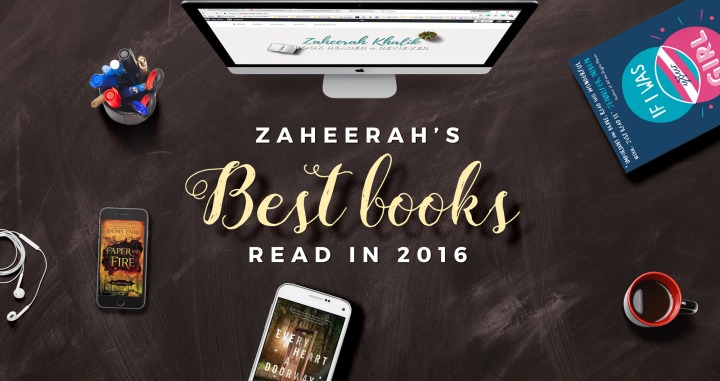 (Please excuse the messy feature image. I made a much better one but for some reason, the file didn’t save properly so I had to rush a new one

2016 was a strange year in terms of reading – I read a total of 85 books, much less than last year, and there were many highs and lows. A resolution of mine was to read more books I know I would like but I feel like this year my negative to positive reviews ratio was very uneven. But I did find some new favourites. So… on to the post! My top six favourite reads of 2016!

I never thought I would branch towards kidlit this year but Time-travelling with a Hamster was such a cute and quirky debut. It’s about a twelve-year-old called Al who learns his deceased father has created a time machine and tries to prevent his dad’s death. It was brilliantly tense, and writing this post reminded me that I haven’t bought a physical copy yet! Would definitely pass this book along to younger cousins and to older readers!

Another kidlit book but Behind the Canvas was so good! It had such an unusual setting and the way Vance creates the story using famous paintings and footnotes were a great way of storytelling. And the cover, oh boy, I hope this book becomes an animated movie with the art-style of the cover because LOOK AT THAT COVER! Anyway, Behind the Canvas had such a unique premise and the idea of a world created by artists is so beautiful.

I can’t describe how beautiful Amanda’s words are. But here’s a snippet which I absolutely love!

I read this as part of #DiversityDecBingo and soon after I finished it, I knew it was a favourite. It was heart-breaking, fun and adorable. I’ve been so bad recently with my reviews but a review of this will be up in the new year! I promise!

Another DiversityDec read! Every Heart A Doorway was, simply put, amazing. The characters were diverse (including a trans boy and an asexual protagonist) and well-developed. It’s very strange but humorous. The plot is brilliant and so smart. Again, like If I Was Your Girl, a full review will be up in the new year.

There was no doubt in my mind that Paper and Fire wouldn’t have been on this list. The Great Library is my all-time favourite series and Rachel is such a nice and sweet author. And I absolutely adore this series to pieces. Rachel’s humour and beautiful cast of diverse characters meant that I can’t do anything but fall in love with this series’ sequel.

While this series has its major flaws, and I’m well aware of it, but I just loved this series so much. I’m not a big on interacting with book fandoms I’m apart of. Not that I don’t want to, I’m just really bad at it. But this series, personally, had such a huge impact on me. And watching this fandom grow was so amazing.  I found myself attached to these characters and their stories. When I first read TFC, I actually have it 1 star on Goodreads and I didn’t want to continue, at first. But it’s ending got to me and whenever I tried to read another, I couldn’t enjoy the book because I HAD to know what happened next. I’m not a sports fan but this series had me crying over a sports team of a damn fictional sport!

And that’s all the favourites that I had this year! Have you read any of these? Feel free to recommended or tell me about yours! Until next year, happy reading, everyone!