I was initially going to write separate reviews for each book in the Shatter Me series. But I decided that it was going to work much better as one post about the series. I should note that this is only a series review (so far) because I had this planned before Restore Me came but didn’t get time to read it until Restore Me came out. I should warn that this post is spoiler heavy and if you haven’t read it yet and want to read it without spoilers, ignore this.

Judging from the more popular reviews of this series, everyone hated the stylistic choice, but I think it was one of the better parts of the novel. Especially, since I read the series one after the other, it makes sense, and I enjoyed reading the development of Juliette’s journey through this. 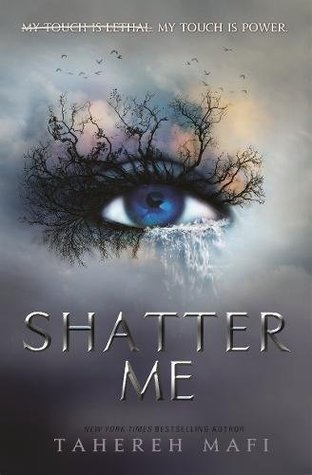 The last time she did, it was an accident, but The Reestablishment locked her up for murder. No one knows why Juliette’s touch is fatal. As long as she doesn’t hurt anyone else, no one really cares.
The Reestablishment said their way was the only way to fix things, so they threw Juliette in a cell. Now so many people are dead that the survivors are whispering war – and The Reestablishment has changed its mind. Maybe Juliette is more than a tortured soul stuffed into a poisonous body. Maybe she’s exactly what they need right now.

Shatter Me, in my opinion, is the worst book of the series. If hadn’t borrowed the entire series from the library already, I would’ve dropped the set the second I finished the last page. But I follow Tahereh Mafi on social media, and I really enjoy her personality so I kind of held onto this series, hoping I would somewhat enjoy these books. This is very much a romance novel with a hint of dystopia. Like as if the story forgets it’s in a dystopian setting where the world is falling apart and picks itself up every now and then.

I had so many issues with Adam and Warner. I hate that we’re supposed to ship Juliette with both when I just didn’t like any of them. They both think they’re so entitled to Juliette and I was so almost just skipping the pages (and nearly the entire book) when they both spoke. As a villain, I liked Warner. He works as a creepy villain, he works as this incredibly evil guy, but the second he becomes the love interest, I was angry. As a villain, he is brilliant but whatever romantic connection he has with Juliette is just lost on me. I was actually very disappointed because I really wanted to see what everyone was swooning about but I didn’t see it.

I was really disappointed by the ending. Mainly because what’s set up there is what I was expecting to have happened much closer to the beginning of the novel. Here is where the plot picks up and dives itself into dystopia. I understand the addictiveness of Shatter Me, but this was so overrated. Not enough worldbuilding or introduction to the story makes this series worth the hype it’s given. Even the writing was too much. The strikes and messiness were fine but reading it also felt over the top.

It should have taken Juliette a single touch to kill Warner. But his mysterious immunity to her deadly power has left her shaken, wondering why her ultimate defense mechanism failed against the person she most needs protection from.

She and Adam were able to escape Warner’s clutches and join up with a group of rebels, many of whom have powers of their own. Juliette will finally be able to actively fight against The Reestablishment and try to fix her broken world. And perhaps these new allies can help her shed light on the secret behind Adam’s—and Warner’s—immunity to her killer skin.

To be honest, after reading this, I just hate the damn romance between Juliette and Warner/ Adam. There’s serious shit going down in this series, but Tahereh Mafi just doesn’t move away from Juliette feeling sorry for herself because she can’t have the guys she wants. Tahereh is a great writer, and I can see it come through in this series but the plot really just doesn’t work. Whatever appealing qualities that Adam had in book one literally gets stripped away and pushed onto Warner. Still, Team Neither because Juliette is literally better off without a romantic partner. Kenji, you absolute series saver. Even when I didn’t like him, his logic and him being the only one who had any sense and helped Juliette more than the other two did. Juliette really only grows as a character when the other boys aren’t even near her. Regarding plot, not much happens, there’s like 4/5 crucial moments, but even then a lot of this book is stretched way too much. Again, 97% romance and then the 3%, the series remembers it’s dystopian.

With Omega Point destroyed, Juliette doesn’t know if the rebels, her friends, or even Adam are alive. But that won’t keep her from trying to take down The Reestablishment once and for all. Now she must rely on Warner, the handsome commander of Sector 45. The one person she never thought she could trust. The same person who saved her life. He promises to help Juliette master her powers and save their dying world . . . but that’s not all he wants with her.

Ignite Me was my favourite out of the original trilogy. Here Juliette really grows and shines on her own and all the stuff in the first two books. Still Warner and Adam really get on my nerve. They’re all in the middle of a crisis like their feelings can take a step back for now when they’re lives are still at stake. I really enjoyed the lead up to them raising their army to fight back at the Reestablishment. I just wished that took a more significant chunk of the book rather than Juliette and the boys. Not a huge fan of how obviously Tahereh Mafi changed everything evil Warner did previously to now fit his new angel-like image. Still a prick in my mind. Adam is an even bigger fool in this series. It’s like Tahereh Mafi literally did everything she could to get you to despise Adam, and it worked. Juliette grows up a lot in this book, but Adam is actual trash. Like if I were forced to choose, I would be Team Warner, and that’s because if I had no other choice. But I didn’t like that Juliette thought it was okay for her to tell Warner that he’s related to Adam. She tries to force Adam, and while Warner had a right know, Juliette had no right to decide when that happened and push it.

That ending was good but way too fast. Like all that prep and then everything is quickly wrapped with no reflection as to what comes next? It just felt cheap, and if Restore Me wasn’t announced, this series would’ve been so disappointing. 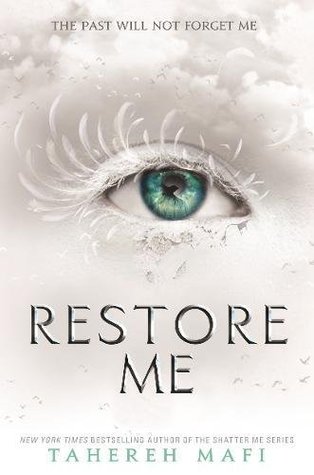 Juliette Ferrars thought she’d won. She took over Sector 45, was named the new Supreme Commander, and now has Warner by her side. But she’s still the girl with the ability to kill with a single touch—and now she’s got the whole world in the palm of her hand. When tragedy hits, who will she become? Will she be able to control the power she wields and use it for good?

I thank whatever chain of events that led to Tahereh Mafi decided to continue the series with three more books because Restore Me, for me, saved the entire series. I’m not even joking, if she had left the series after Ignite Me, review as this whole would’ve been so cynical that I wouldn’t also be sure if I should post it. Like this is what I expected from reading all those reviews from Book One. All that hype and this what I expected the outcome to be.

The world building for once is remembered and actually talked about. The world makes a bit more sense, and we can finally see the world we’re introduced to three books ago. Adam/ Warner/ James finally realising they’re family now and actually beginning to form a relationship was great to read. Restore Me was very much character driven and a much better improvement to the other three books. The last quarter was actually decent, and while the reveal was sort of obvious, there was still the shock. Here I was thinking Adam couldn’t get worse but he has become the biggest “guy who think’s he’s great, gets rejected and now he hates everything.” Like the whole fierce, protective Adam who would anything to save his brother from Shatter Me is slowly fading and it’s a shame.

I still think this book is a 3/5 which is an improvement considering that the last three was 1/5 in my opinion.

Juliette here really gets on my nerve. She’s Supreme Commander but lacks the skills actually to deserve that title. And whenever someone points out that maybe Warner, whose father was the past Supreme Commander, has experience in the role, and has better connections with the other sectors, should help her, she immediately becomes so damn bitter and bratty and complaining that the Supreme Commander role is HER job. And everyone’s like ‘yeah we know, but Warner can help!’ and she refuses to see past that. Like she knows she lacks the experience after being locked away but still does nothing that has any value. After three books, you would expect this behaviour in Shatter Me, not here, in book four.

I still have some hope for this series. I felt like I’ve invested too much time NOT to see it through to the end. I just really hope whatever excitement I had for Restore Me continues onto the remaining series. Please don’t let this be a fluke.

To end: Nazeera Ibrahim, I love you.

Content warnings for the entire series, most apply to all four books: PTSD, anxiety, depression, suicide mentions, ableism, mention of past abuse, alcohol and medical abuse, racism, gun violence and unchallenged transphobia (restore me) If you’ve read the series and felt like I’ve missed something else, please tell me!

4 thoughts on “Series Review: Shatter Me”