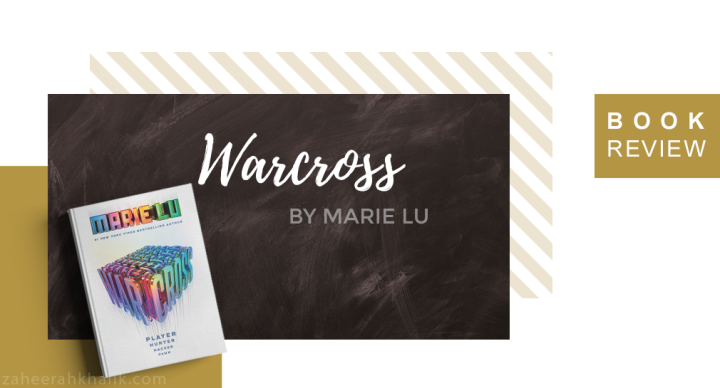 Warcross has taken the world by storm. Millions log in every day, millions are made every day from it. And Emika Chen has hacked her way in. Now its creator, Hideo Tanaka, wants to hire her, a teenage hacker, to undercover its biggest security issue.

Warcross is seriously one of the best books I’ve read this year. I can’t believe how much I loved this book. It’s so thrilling and engaging that I was so shocked how well this book suited my reading taste. (Seriously, if anyone knows any other books like this, throw them my way.) I loved everything about this.

The world its set in is so annoying amazing that I’m mad we don’t, as humanity, have not reached the kind of technology there is in Warcross. Warcross is, in simple terms, a VR game where the player is literally immersed into their environment. The sky’s the limit basically in this game. And like we have Smash Bros tournaments, there are competitions where the best players are pitted against each other in the ultimate gaming tournament. It’s so brilliant to read how the game worked, which connected users worldwide and made VR practically actual reality. The workings of the game were so much fun!

I have to admit the plot twist in this book was very predictable. I picked it up quite early who it was that was hacking into the Warcross system, but I have to admit I was completely thrown off by the other half of the reveal as well. I’m just glad I read the book now when its sequel, Wildcard, is closer to being released.

Just from this one book alone, I now understand the hype around Marie Lu’s books. If my TBR list weren’t so jam-packed, I would’ve read everything else she has written in a heartbeat straight after reading Warcross. Her cast of characters here are so amazing and brilliant, and I quickly grew to love in like seconds. They’re all so different but work so well together. I can’t tell you how great they are. I think Hideo may be the only character that still hasn’t grown as me, especially as the love interest. His role out of that was so engrossing, and I absolutely loved him. I’m a picky romance reader even in a book I loved like this, it just didn’t get to me. Like the development between them was sweet but, again, not for me.

Overall, there were certain elements, such as game design, to its world that left questions and some moments of predictability but nonetheless, I enjoyed it a lot. Like damn, I’m more upset that this is the first Marie Lu book I’ve read. What have I been missing out?