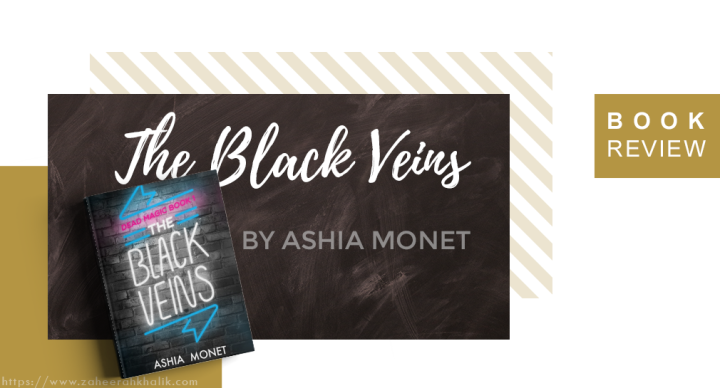 *I received a copy via the author in return for an honest review. This in no way affected my opinion of the book.*

After Blythe witnesses her family being kidnapped right in front of her and her best friend injured, she’s forced into a road trip like no other. In search of other powerful magicians like her or “Guardians”, she must make her way to Electric City. But in a world where magic thrives and an imminent war between the two magician governments forces Blythes and her new friends to think on their feet and discover magic in a new way.

I found The Black Veins an interesting read. The writing is easy and enjoyable, and I found myself barrelling through the book with much ease, despite my own issue with the pacing. I particularly enjoyed the way Monet brings together all these teens who seemly have nothing in common. It was hilarious and sweet, watching them fall apart and come back together as a team. All the guardians have their own quirks that make them stand out. At first, I wasn’t too sure about the comedy aspects of this book, but I found it so funny, and I really loved how realistic all these teens came alive.

Blythe is the leader whose family kidnapping kickstarts her journey across the states. Slowly, she comes in contact with the guardians. Cordelia is a stuck up hacker, Daniel has never left his parents side, Antonio is confident and brash with a hilarious comedic flair. The last three I’ll keep unnamed were equally exciting and fun to experience.

I found the pacing to be quite the biggest pitfall for this book, and the lack of consistency in its pacing is where I struggled the most in the book. The overall journey we witness was quite exhilarating, and Ashia Monet is clearly a talented writer, but the story felt quite long and what we’re given in terms of worldbuilding doesn’t feel the gaps as well as I expected it to. Given the number of Guardians we meet, I feel like I didn’t really connect with the last three as much. But I do believe this is something that will most likely be worked upon in the sequel.

Overall, I found The Black Veins to be a strong debut. A YA urban fantasy that follows a group of teenagers. I found their journey to becoming a found family quite sweet, and I would definitely recommend this book. I might just chalk my negativity as the result of myself never really enjoying the first book as much as the rest of the series. If you’re interested in an urban fantasy road trip that follows a ragtag group of teenagers with enough power to destroy the world basically, then The Black Veins is definitely a treat for readers. And considering the ending of The Black Veins, I’m excited to see what happens next.