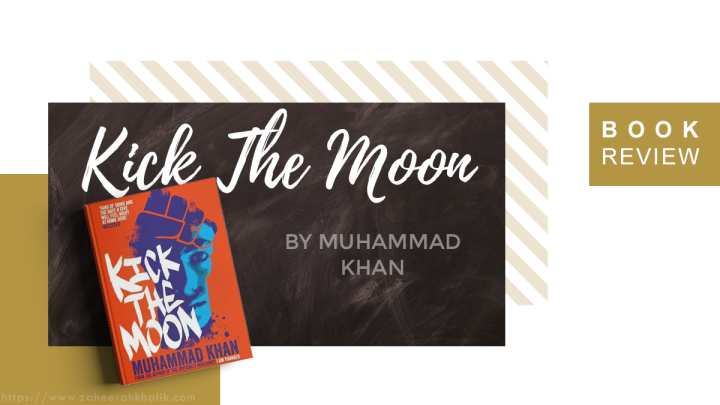 After being told that brown kids can’t be superheroes, Ilyas creates his own one. PakCore is made from his own blood, sweat, and tears who continued to grow beside him. Now fifteen, Ilyas is under pressure. GCSE exams looming, his dad wants him to take over the family business and his friends don’t care because their crew, DedManz, is for life. Until he’s serving detention and meets Kelly, who is just as fed up as he is, however, the protection that their detention provides won’t last forever and Ilyas must face the consequences or risk losing the only person who gets him. But standing up isn’t as easy as the comic books say.

Kick The Moon was promising, and like Khan’s debut, falls flat before the book could even kick-off. This story had so much potential and that I’m disappointed in myself for not enjoying it. The narratives explore a lot of important themes like racism, sexism, toxic masculinity, peer pressure through the life of a 15-year-old Pakistani Muslim boy. That information alone made me disregard my dislike for Khan’s debut and give this one a shot, but I honestly couldn’t get to grips with this one. The story just didn’t work for me. Despite being quite eventful, I just couldn’t engage with the text. A lot of it was underwhelming and tried too hard to fit so much into not much space. I couldn’t feel invested in the story, regardless.

Stereotyping and dialogue was the main issue for me in his debut and that really continues into Kick The Moon. The entire cast of characters was just awful and continues to play into stereotypes without a slight bit of originality. Illyas’s father is overbearing and is textbook toxic masculinity, his older sister seems way too immature for her age, and everyone else was literally plucked straight from hell. (Okay, maybe the teachers were more realistic because I’ve had horrid teachers my entire life.) Perhaps it was a writing choice, but considering the context of the book, it needed to be better. Imran is our villain for the novel, and he was the only one that made sense to be terrible the way he is. Using the idea that he’s a successful sports player, therefore do no wrong is such a common thing that happens in school. It may seem unbelievable but it’s actually quite common for boys like him to have much power in his circle and no one believes anything terrible about him. There was an opportunity to have a discussion about toxic masculinity, especially within the SEA Muslim communities, but it’s a shame it wasn’t introduced despite the groundworks that were laid.

Overall, Kick The Moon was way too exaggerated and stereotypical to be remotely enjoyable. I commend any form of representation but I hated putting myself through this book. Many for a younger reader, this would be more up their alley and could gain more from this, but I won’t be rushing to recommend this book to anyone. Moreover, after another disappointing read, I don’t think I’ll be reading anything else from Khan in the foreseeable future.