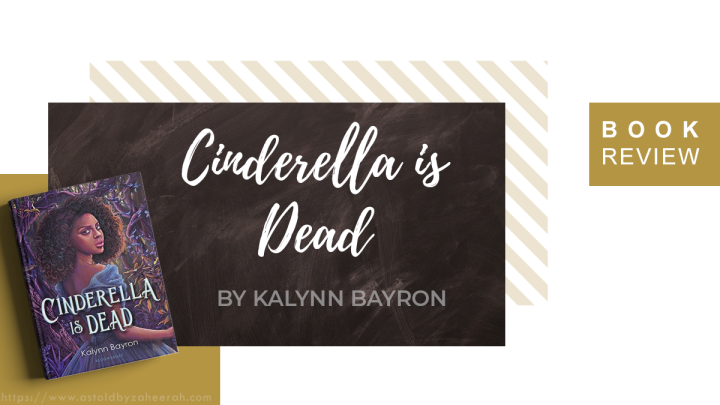 Two hundred years after Cinderella met her prince, every young girl of Mersailles must appear at the Annual Ball, where the Kingdom’s men select their future wives. All the girls know that they risk disappearing, never to be heard from again if they’re not chosen. Sophia yearns to marry her childhood best friend, Erin, who fears the repercussions their union would bring. An incident at the ball sends Sophia on the run, the King’s men hot on her heels. When she finds safety in Cinderella’s abandoned mausoleum, she comes face to face with one of the last descendants of Cinderella’s family, Constance. The two girls must work together to defeat King Manford’s reign of terror or risk their story be rewritten.

Cinderella Is Dead is perfect in its concept. A dark, imaginative reinterpretation of the well-loved fairy tale.  Prince Charming turns cruel, and his successors follow his actions two hundred years later, forcing girls to appear at an actual ball searching for their future spouse. Once married, they are nothing but property to their husbands. They all must abide by a curfew, and nothing they own is genuinely theirs. Sophia has despised this system for a while and finally has a chance to escape during the ball. But the execution of, quite frankly, everything in this novel left me disappointed and underwhelmed.

To start, the story was doomed from the very beginning. It begins strong with Sophia begrudgingly preparing for the Ball; she makes a point whenever she can that is very much against the system, while her parents dissuade her from speaking too loudly in fear of being accused of treason. She plots her escape and takes a chance during the ball and meets Constance, who confirms that the Cinderella story that the Kingdom has passed down generations is false. From then on, the story takes on a very tepid journey of Sophia and Constance journeying through a forest and plotting to take down the King. No tension and sadly really dull. If anything, I enjoyed the smatterings of fights scenes and seeing Constance and Sophia work smart to evade capture. But the rest of the plot fails to capture any good attention. I felt like I was being dragged from one plot point to another and told to deal with it.

The characters were highly disappointing. Sophia is a selfish character who continually acts first and thinks later, leading to other people getting harmed. She’s aware that her actions can get her in trouble, but plot armour saves the day for her while everyone gets hurt. We also know nothing about her. Her likes, dislikes, quirks, nothing makes her stand out aside from her decision to go up against the King. Erin is rarely on-page but was the most interesting for me. She wants to be with Sophia, but her fear of the society around her creates an internal struggle that I would have loved to develop. And then comes Constance, mysterious and funny, but the possibility of what could’ve been is squandered for insta-love and no development.

I’ll end this review with a disappointing sigh. Never have I seen a book with such potential fail to follow through on its promises. It’s an easy read, albeit grim in some select scenes. Sophia’s journey barely goes beyond its surface level, and the characters are wasted and discarded just as they’re introduced. A promising premise that needed to go back to the drawing board.