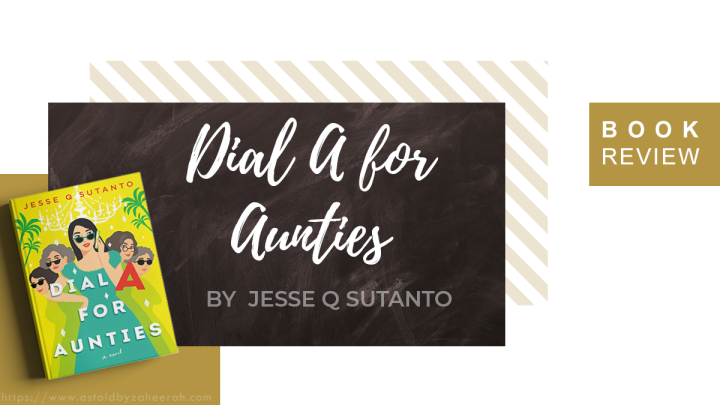 When Meddelin Chan accidentally kills her blind date, she enlists the help of her mother and aunties to get rid of the body. Things become tricky when the body is accidentally shipped to the wedding destination that her family business is working on. The wedding that is supposed to skyrocket their reputation, and Meddelin must make sure that not even a dead body can get in the way of her aunts’ antics. They are almost out of the woods until Meddy’s college love re-enters her life. Can Meddy fix her relationship, pull off a wedding and get away with murder all in one day?

This book is a weird one. I don’t think I’ve ever read a book this ridiculous. But I loved every moment of reading this. Meddelin Chan is a 26-year-old photographer working for her family’s wedding business run by her mother and aunts. Meddy believes in the Chan Family Curse, where all the men in their family end up leaving and is adamant not to abandon her family like her father, uncles and male cousins. Even if it meant giving up Nathan during university, but now her mother thinks she’s ready to get married and poses as Meddy on an online dating site, snagging a date with the local hotel owner, Jake.

Meddy agrees to go on a date, and when Jake goes too far, Meddy tases him while driving, causing them to crash. Panicking, she tells her mum the truth, who brings in her aunts, and they begin to work on dealing with Jake. One mistake sends the body to the island resort, and not only does Meddy have to deal with the wedding and the blood on her hands, she learns that her ex-boyfriend Nathan is the owner of the hotel that is hosting the wedding, and he’s ready to try again.

Dial A For Aunties is a mish-mash of things that usually wouldn’t work for me. But somehow, Sutanto makes it work, and it’s hilarious. When I reached that final page and read the author’s note, I’ve never been so excited to see that there’s already a film adaptation in the works. This book is pure chaos that I hope translates well into film.

The comparison to Crazy Rich Asians is apt. Meddy can hardly believe they snagged the wedding of billionaires Tom Cruise Sutopo and Jacqueline Wijaya. A guest line goes into the thousands and gifts that could pay off Meddy’s college debt in a single swipe. Amid the chaotic storyline, the story’s heart lies in the sacrifices Meddy and her aunts make in the name of family. Sutanto delves into the familial relationships of the Chan family line and the difficulties most immigrant families face for the betterment of their loved ones. Meddy is constantly thinking about her family, even choosing to break up with Nathan despite her own wants. She undergoes some serious character development and begins to understand how to speak up for herself.

Overall, Dial A for Aunties was hilarious and entertaining. The story is so strange that I found myself speechless at the absurdity of this entire plot. Despite the chaos, it is a story of family, sacrifice all wrapped up in an absurd murder mystery that will have you shaking your head at every turn of the page. I couldn’t even believe there is a sequel to this mayhem. I’ll be waiting for the return of the Chans.

3 thoughts on “Review: Dial A For Aunties”